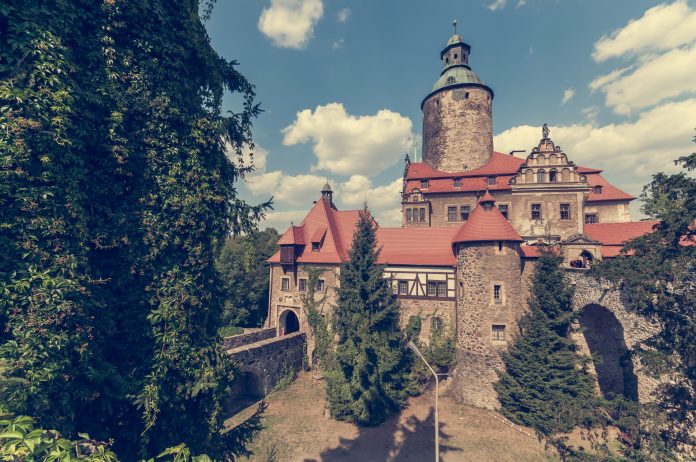 The medieval Czocha Castle was originally a fortress built in the 13th century under Wenceslaus II, King of Bohemia.

In the 16th century, the castle was transformed into a residence, in keeping with the architectural and furnishing style of the time. At the end of the 18th century, a fire destroyed part of the castle, which was later rebuilt.

At the beginning of the 20th century, the industrialist Ernest Gütschow bought the castle, which was rebuilt and modernized by a famous architect, Bodo Ebhardt. Czocha Castle has been transformed into one of the most beautiful historical buildings in Lower Silesia.

Czocha Castle has often been used as a background in films. There are many scenes from the castle in the films The Witcher, Two Worlds and Dywersant, as well as in a variety of documentaries and series.

There is a nice hotel and restaurant in the castle, keep in mind that some of the rooms have their own bathroom in the hallway, this is due to the historic interior of the building. So if you want to try to stay in the castle, you need to be aware of this fact.

In addition to being a hotel and restaurant, the castle is visited by many tourists and there are daily tours with guides who will show you treasures connected by hidden passages and of course many exciting stories.

The tour begins in the large knight’s hall, which also functions as a festival hall at times. Here guests take their first steps on an extraordinary walk around the castle that has come to be known as Polish Hogwarts.

If you want other experiences on your holiday, the castle is not far away, for example from Luban, Görlitz in Germany and Frydlant in the Czech Republic.

City City Guide
#Luban Visit Luban Lubań (German: Lauban) is located north of the Jizera Mountains on the western bank of the Kwisa River in Lower Silesia in southwestern...

City City Guide
#Frydlant Visit Frydlant The castle in Frydlant is one of Bohemia's most important historical buildings, Frydlant is a combination of an old medieval castle and a...

City City Guide
#Görlitz Visit Görlitz Gorlitz has had so many different political affiliations since 1002 that the list is too numerous to name. Yet despite the changing borders...